Both Husky and Kobalt have skyrocketed in popularity in recent years, and they are now considered to be two of the most prominent manufacturers of various hand tools available. There are plenty of reasons for the success of both brands, and while the two have been in competition for a while now, they share many similarities.

Because of their resemblance to one another, it can be difficult to discern between the two, which is a huge problem for the wary consumer wanting to get the most bang for their buck. No one wants to waste money on one brand when another can provide them with so much more.

To this end, we have decided to provide in-depth comparisons between Husky and Kobalt, as well as a brief history of each brand. We hope to assist in informing your decision of which brand you will place your trust in, but to do that, we need to dive right in and start unpacking the issue of Husky vs Kobalt – which brand will win? Read on to find out.

This section is only meant to provide some context for the ongoing competition between Husky and Kobalt. As such, we will try to keep it short and concise.

A Brief History of Husky

Before Husky was known simply as “Husky”, it first went by the name of “Husky Wrench” when the brand was first founded in 1924 by Sigmund Mandi – an immigrant from Czechoslovakia. Some time after that, in 1929, the rights to the name were transferred to the Olsen Manufacturing Company, who then labeled the brand as the “Husky Corporation”.

The rights to the Husky name changed hands many times over the course of the 20th century, eventually ending up in the possession of Stanley Works in 1986. In 1992, Stanley began distributing Husky products solely to Home Depot, who themselves eventually acquired sole ownership of the Husky name.

Husky has been around for a long time and has endured for nearly a century despite a severely convoluted history. Has the quality of their products increased or declined? We will find out shortly.

A Brief History of Kobalt

Kobalt is by far the younger of the two brands, only getting its start in 1998 to compete against Home Depot (and by extension, Husky), as well as Sears and its house brand, Craftsman.

Besides a few changes in suppliers and manufacturers, the Kobalt brand has enjoyed a fairly simple history. Despite that, they have grown exponentially in popularity, and the brand has succeeded in its initial goal of competing with Husky and Craftsman.

Popularity is not a measurement of quality, however. Now that we are all well-acquainted with the histories of both brands, let us take a look at their products and how much value we can actually get out of them.

Who are These Brands Trying to Sell to?

Both Husky and Kobalt endeavor to provide a cheaper alternative to more “premium” brands of hardware and tools without sacrificing quality. As such, both brands have the potential to reach a wide demographic – anyone with a garage and a need for hand tools of various kinds will naturally gravitate towards either one of these brands.

That being said, experienced professionals would probably do well to avoid both Husky and Kobalt in favor of a brand that far exceeds the quality and craftsmanship that these two brands can provide.

What is Great About Both of These Brands?

We mentioned earlier that Husky and Kobalt share plenty of similarities. In terms of warranty, value, and the durability of each of their individual products, both brands excel and then some. Regardless of which one you actually end up choosing, these three qualities are guaranteed.

The real meat of this comparison lies with two products of similar varieties, one from each brand. For Husky, we will be taking a look at their famed Mechanics Tool set, consisting of 268 different pieces. For Kobalt, we will examine their own Mechanic Tool Kit, which consists of 227 different pieces. 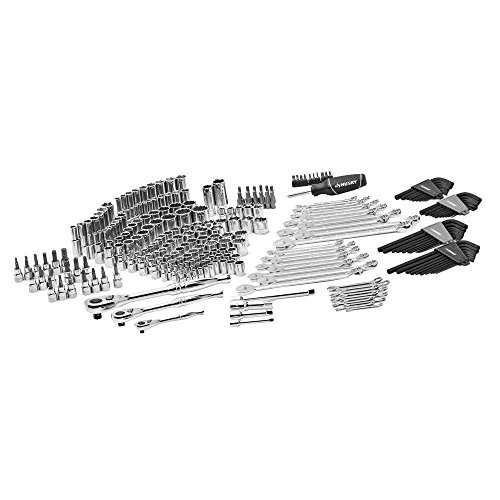 This tool set features just about every popular tool an aspiring mechanic could ask for. That includes no less than 3 ratchets, 4 extension bars, 30 combination wrenches, and 40 Allen keys, both long and short. You will also receive 129 sockets and 39 deep sockets.

Suffice it to say, you will be more than adequately covered when it comes to the selection of tools at your disposal. The quality of the three ratchets may leave a bit to be desired, but each individual piece in this robust tool set is backed by Husky’s full lifetime warranty.

Additionally, the set also comes with a blow-molded tool case designed to house each of the 268 pieces that the tool set includes. 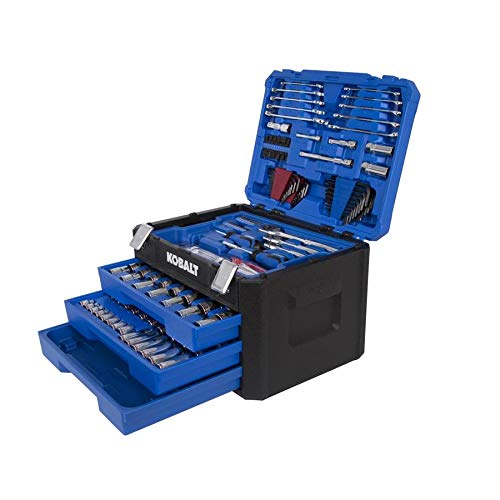 Although this tool kit from Kobalt may not include as many pieces as its Husky counterpart, it still includes just about every tool you will need without any of the more niche items.

The kit includes 117 different sockets (some 6-point, some 12-point), 4 extension bars, 3  ratchets, and 30 different combination wrenches, not to mention the assortment of Allen keys, nut drivers, and insert bits.

This kit also comes with a deluxe, unique blow-molded toolbox, which is a big improvement over Husky’s. Similar to the previous brand, each individual piece in this collection is backed by Kobalt’s full lifetime warranty.

Clearly, the Husky and Kobalt brands are nearly identical in almost every way. That being said, if you want a brand that you can consistently rely on, Husky is definitely the way to go thanks to the overall high quality of each and every one of their products and their years of experience.

However, if you do decide to go with Kobalt, you probably will not be displeased, either. Just be prepared to accept a few shortcuts here and there with the designs of some of their products. But as we said, no matter which way you choose to go, you will be set with great tools.

Craftsman tool boxes are made strong and rugged, so they will last for a lifetime and keep your tools organized. However, sometimes tools get...
Read more
Tools Advice

How to Clean a Tool Box

Depending on the condition of your toolbox, this is quite a major mission and may take some time. Toolboxes can also vary in size...
Read more
Tools Advice

How to Organize a Tool Chest: A Guide from Expert

If you spend a lot of time searching for the tools inside your tool box, then you need to organize it. Here are few tips and tricks that will help you organize your tool chest.
Read more

How to Clean a Tool Box

What Is a Claw Hammer Used For: Proper Use and Techniques

How To Use An Allen Wrench: Your Ultimate Guide

Pipe Wrench vs Monkey Wrench: What is the Difference?